Leaning in or Leaning out? Further discussion. 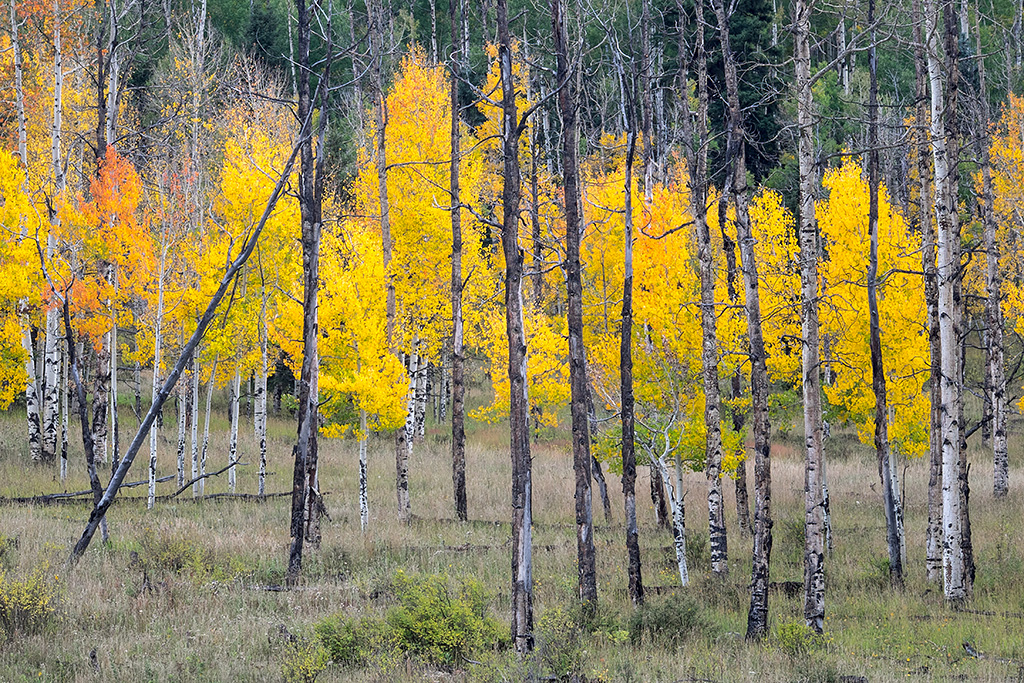 Thanks to all who shared their thoughts about the last two posts.  I posted the two leaning tree images, as they generated an interesting discussion in the field while making them. When Dan (tour partner) showed me the first image (below) with what some of you see as a tree leaning out, I too had the same reaction. It felt like the tree was leaning out of the frame. He responded by saying “I see it as an element that is directing the eye into the frame.” Commenter Rad, has done a good job of articulating what Dan and then I ultimately saw, thus prompting me to make the capture. “The leaning out image for me has a circular, repeating motion to it. I find my eye following the leaning tree into the frame at the bottom, across to the yellow trees on the right, and then up and to the left to do it all over again. The vertical lines are less figural and play a supporting role to the lead characters of the leaning tree and the two yellow trees on the right.” So, at this point, I would argue that the leaning tree in the first image is actually leading the eye into and not out of the frame. 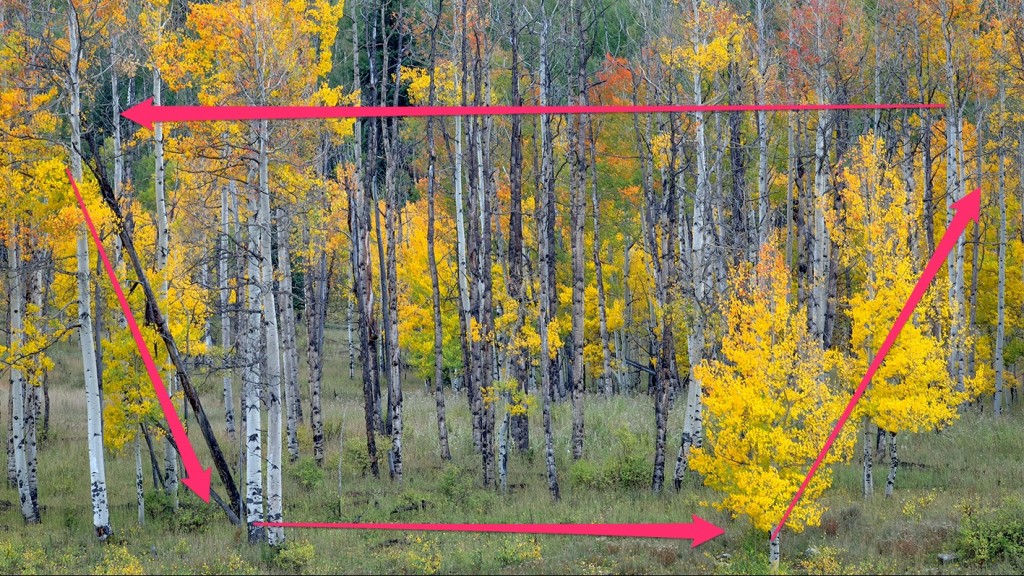 Now, lets look at the other image. This one, most agree, has the tree leaning into the frame.  Again Rad does an excellent job breaking down what my eye is doing.  “The one leaning in takes me in a clean, horizontal but staccato ride from left to right. It’s about the horizontal line of color contrasted with the staccato rythym of the vertical lines of the trees. I can almost hear it as a cymbal crash, followed by a drum beat with a thread of yellow “melody” holding it all together. For me it flows in one direction – left to right- and exits at the right.” Man, I love the drum and cymbal analogy! Thanks Rad. 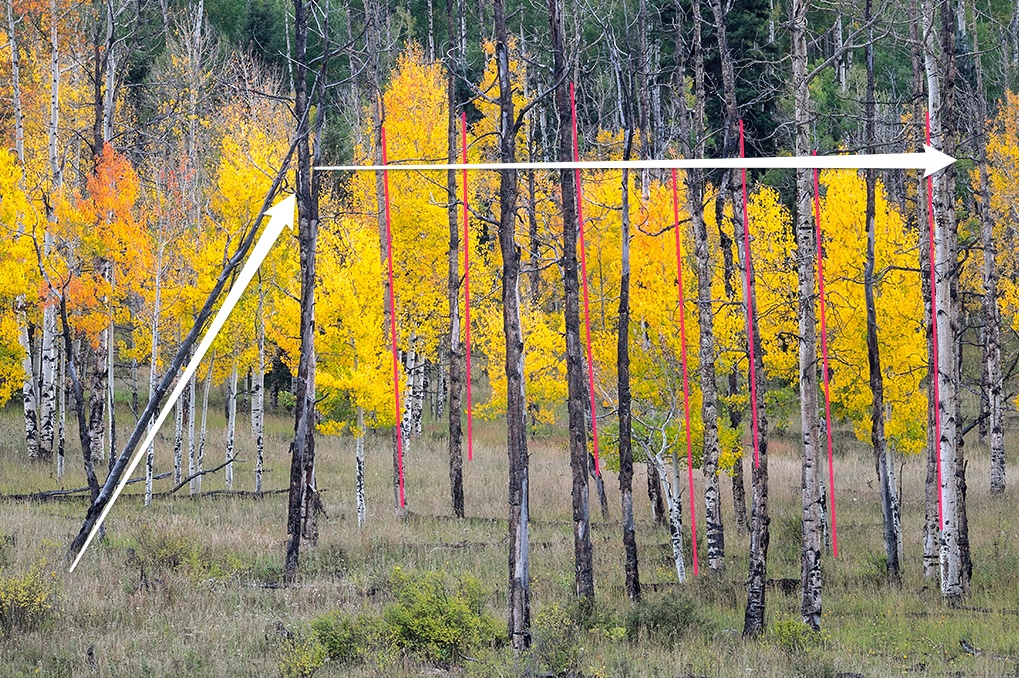 I think it instructive to reiterate what commenter Frank said as it is why I added the leaning tree to each composition. “This is a great example of a comp(composition) based on a pattern and a break in pattern, with all the verticals except for one. ” Frank is correct about adding an element to break a pattern. Pattern images are fine, however, when we add an element that breaks the pattern, we add visual interest. This element may direct the eye in a very clear way. Other times it may simply break the pattern giving the eye a place to go and then bounce back to the pattern. I’ve cloned out the leaning tree in the image below to illustrate. I think the leaning tree makes for a more interesting and impactful image. 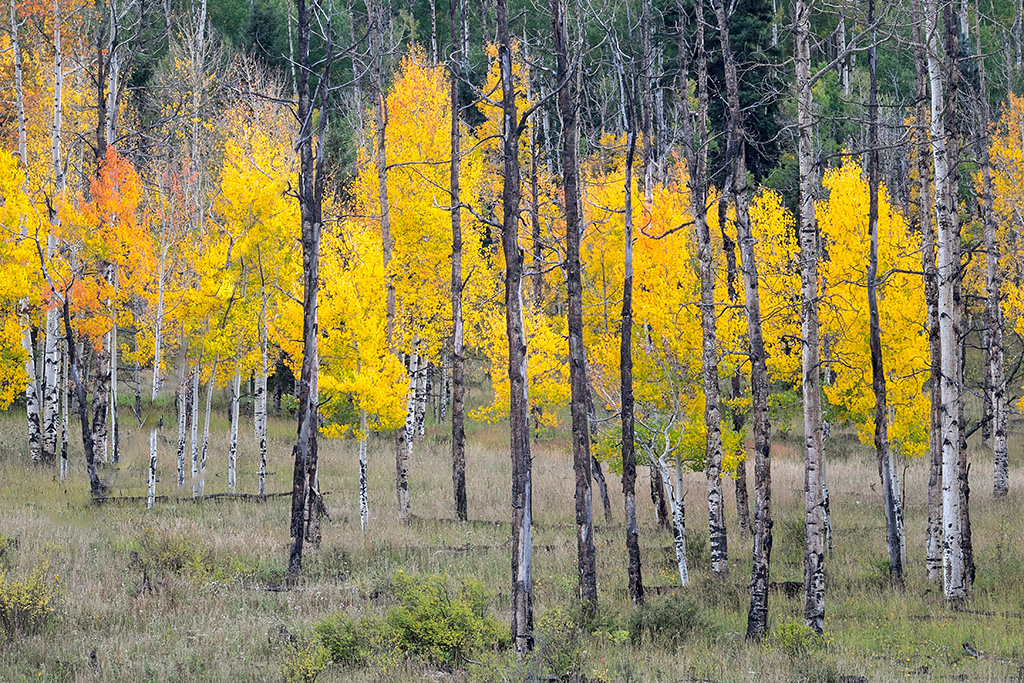 As evidenced by the varied comments, there appears to be no right or wrong image. We each see or read images differently. Ultimately, you need to decide what works best for you. And fight for your vision by the way. Just because someone does not agree, this does not make them right and you wrong.

Lastly, I believe discussions like this are important. Not enough people carefully assess their (or others) images. Doing so allows you to make a more thoughtful decision about your composition in the field.

Which image do I prefer? The second one.