Capitol Reef – Through Their Eyes 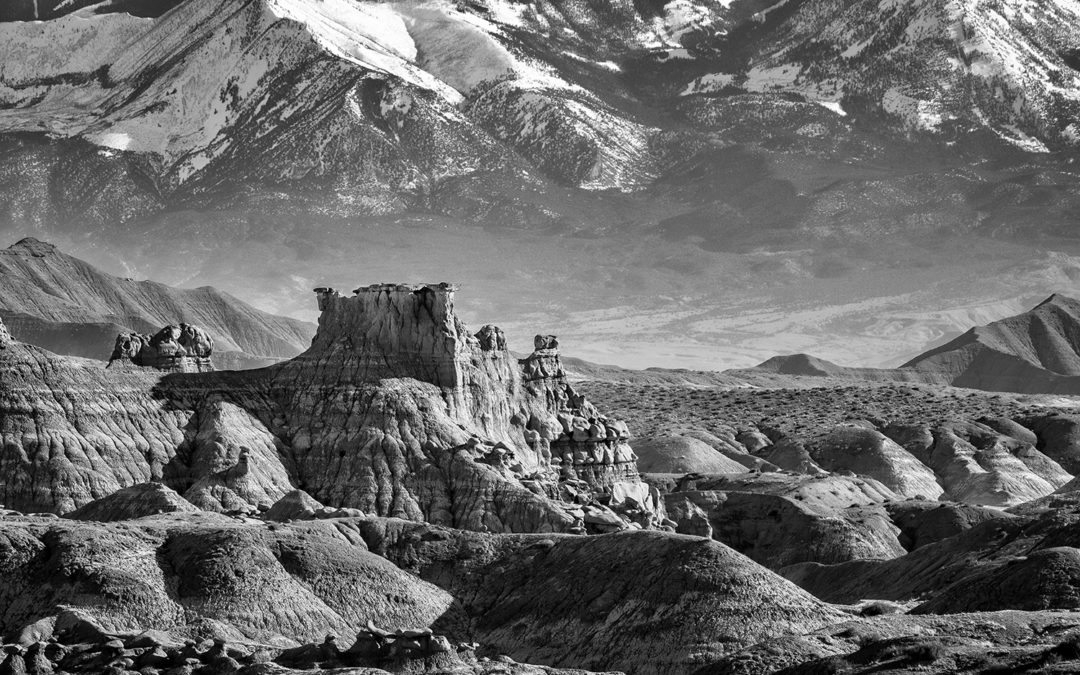 It is time for yet another installment of “THROUGH THEIR EYES”.  This time, images from Capitol Reef Utah.  Enjoy.

Megg McNamee – I shot this Escalante View on the drive to Capitol Reef.  The late light and clouds totally took my breath away! 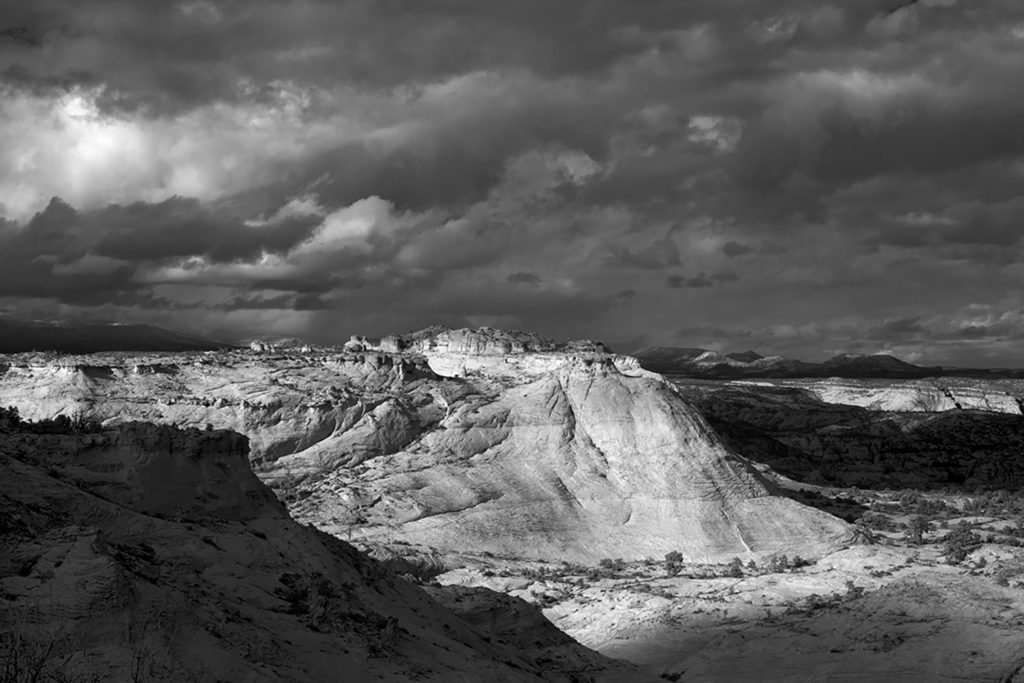 Andrew Hoff – Shortly after arriving at Goblin Valley S.P. it began to pour. As it rained harder, some were ready to back it in and return to the hotel, but Mitch told us to stick with it and wait out the rain. The rain did stop, and I ventured out into the mud. The clouds parted enough to let in a veil of soft light that gently lit the landscape caused the road to glow and become brighter than the landscape. I like the juxtaposition of the rigid horizontal and vertical landscape against the sinuous curve of the road. 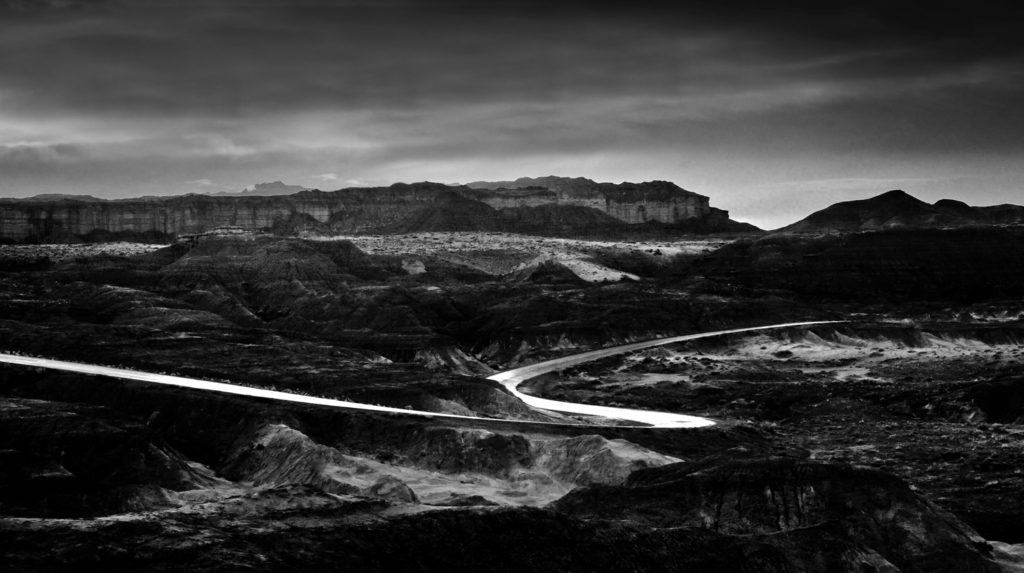 Rich Harrision –  I found the Temple of the Sun and Moon to be a mesmerizing location, and found my composition on top of a rise and sat there for several hours photographing as the light changed and taking in the feeling of solitude and natural beauty.

Louise Shoemaker – I was fascinated by the harsh contrasts in the Utah landscape.  I sat for quite awhile just savoring the view at the Goblins, and was caught by the juxtaposition of snow-covered mountains looming behind the desert formations. 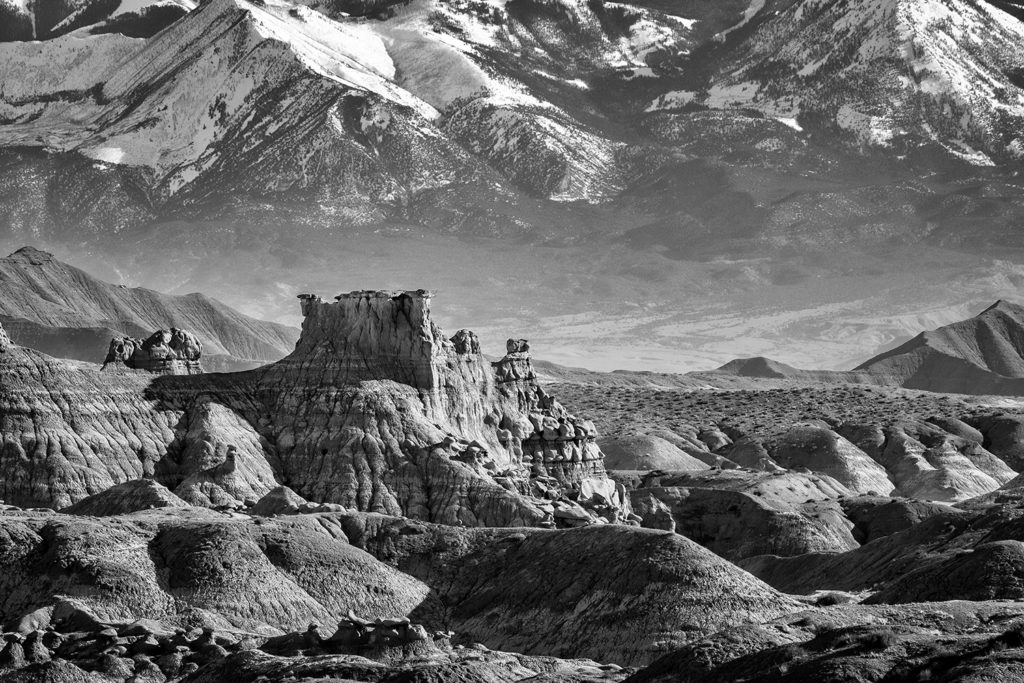 Sherri Mabe – Silence. Here in Capitol Reef the Earth speaks to us through her silence. 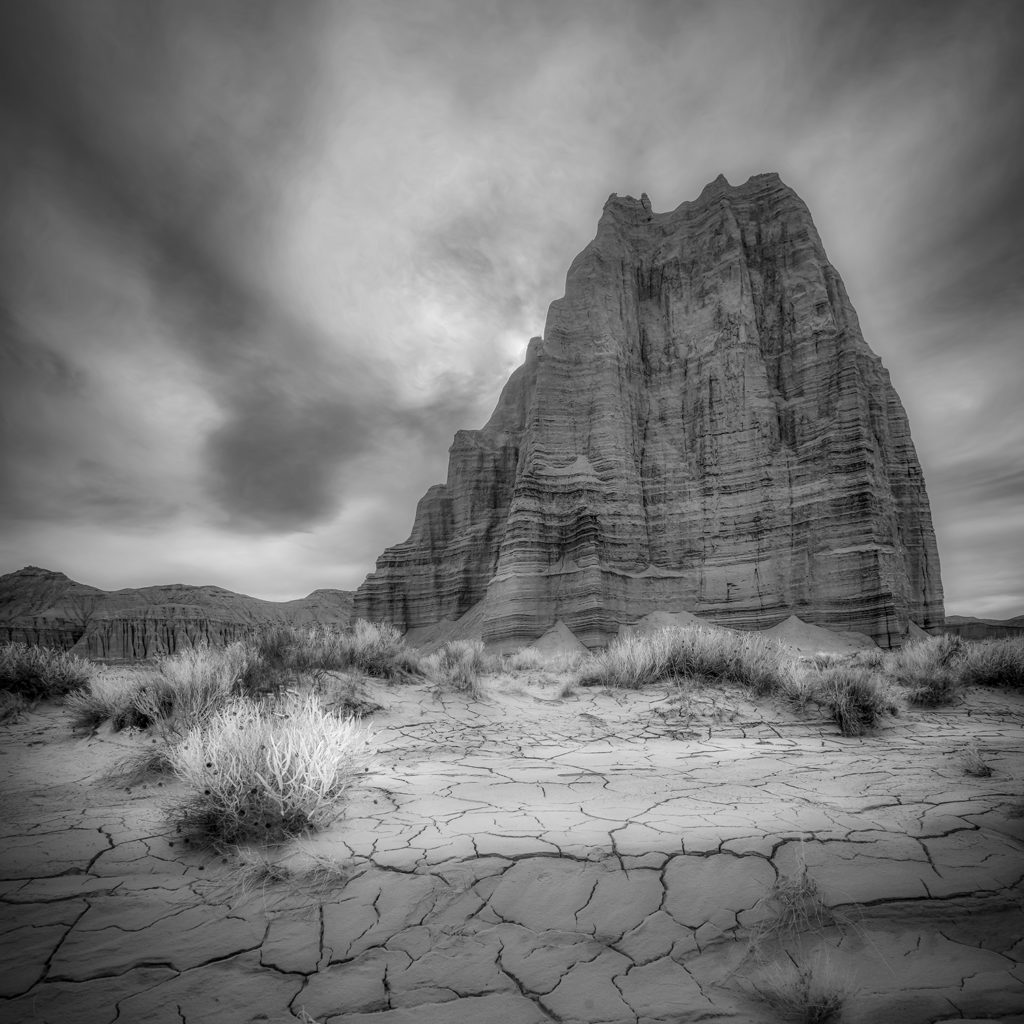 Linda Harding –  Enchanted…(Long Canyon, Utah).  I felt like I was being placed in a magical world.  Blurring the ordinary and the fantastical.   It was my first experience to see a canyon.   I was mesmerized by this tree… the lack of lighting and how it still stood tall.

“It is in the silence of nature where one will find true bliss.”  Unknown 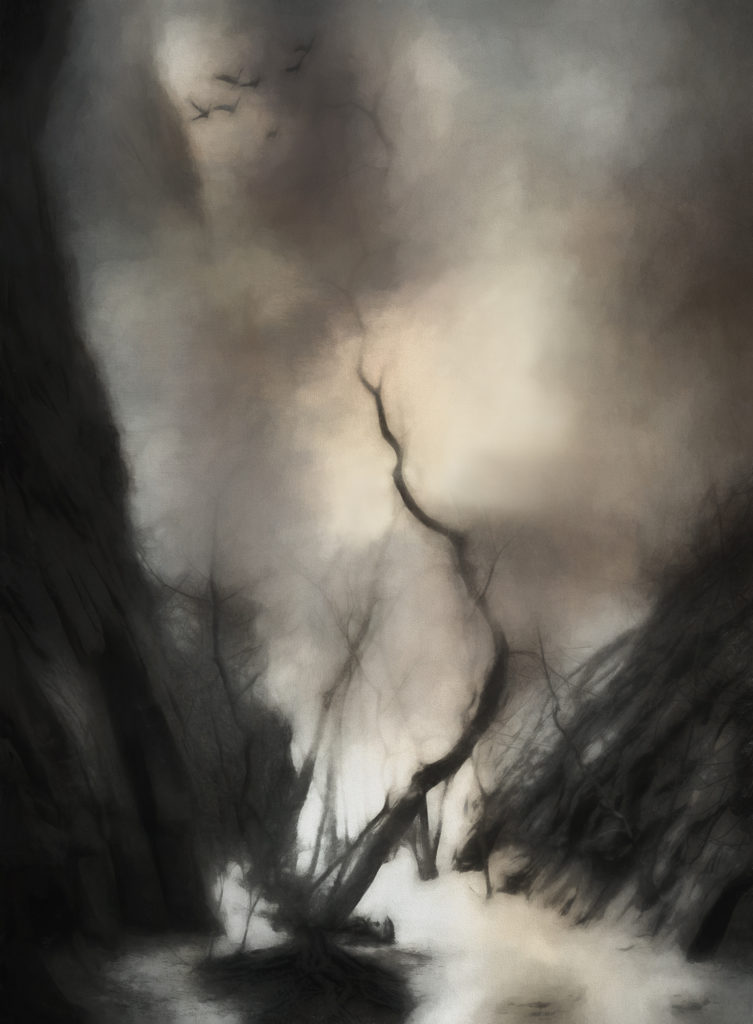 Malcolm Moser – I could have selected many from this trip, but rather than select one similar to those taken by everyone else, I selected this because I went back by myself on the final day, the lighting and clouds were wonderful and different from when we all went out, and I loved Cathedral Valley. 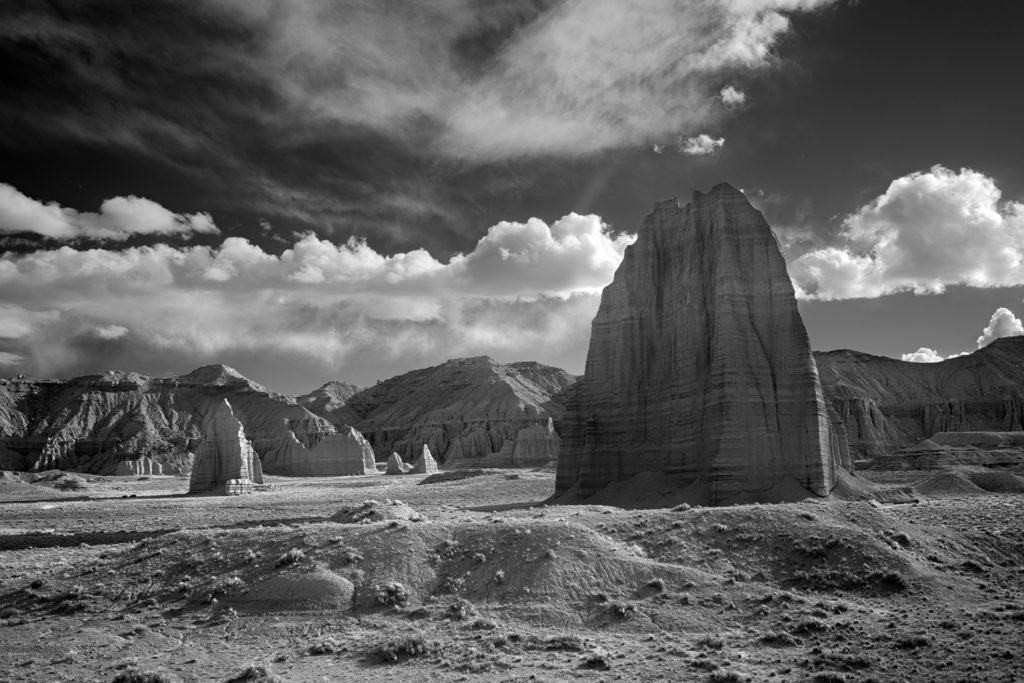 Michelle Cambier – “Although I travel often to the South West, I had never experienced a snowstorm. One morning during our tour we awoke to a severe storm. Later that morning when the snow turned to rain,  I was able to capture a foggy and moody side of Chimney Rock .” 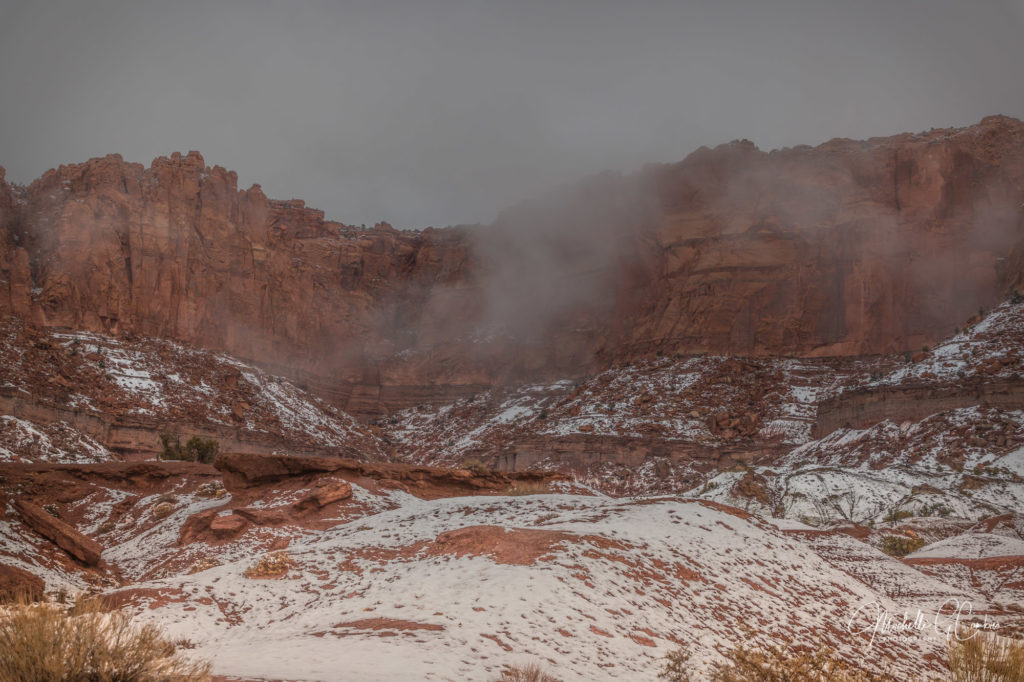 Roxanne Spiegel –   love the post apocalyptic feel of the landscape in and around Capitol Reef National Park in Utah. An image like this allows my imagination to run wild. 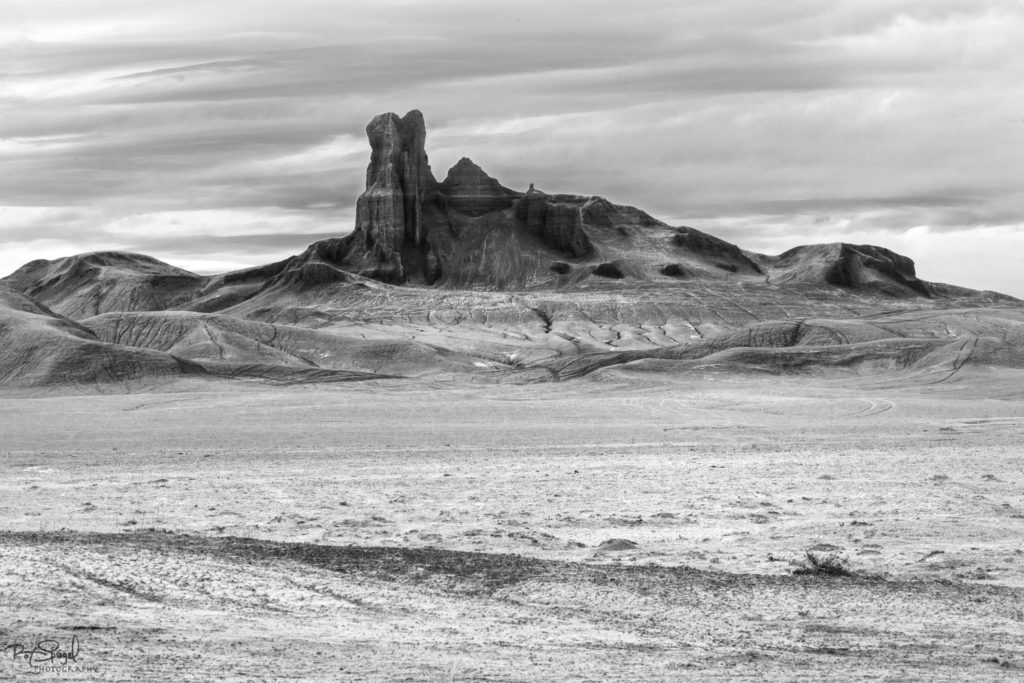 Sandy Radom –  This photograph is my favorite Picture because I was so surprised to see this massive butte in the middle of this barren land. It’s structure with ripples and veins of rock are amazing to me. 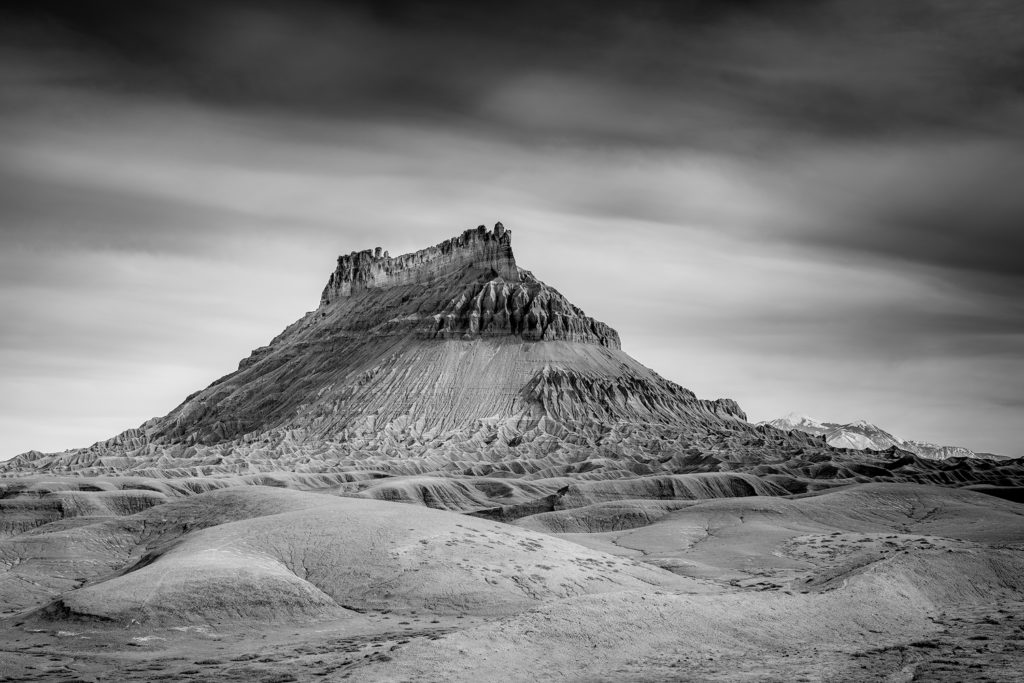 Karl Graf –  “Down I walked into Goblin Valley. Stone soldiers were gathered around waiting for their leader to give direction. I walked around and around through their midsts and found a line of soldiers starting to march. I quickly formed into the back of the line with my camera and tripod on my shoulder like a rifle. On we marched out of the valley to a destination unknown. I slid out of ranks and sneaked back to my car.” 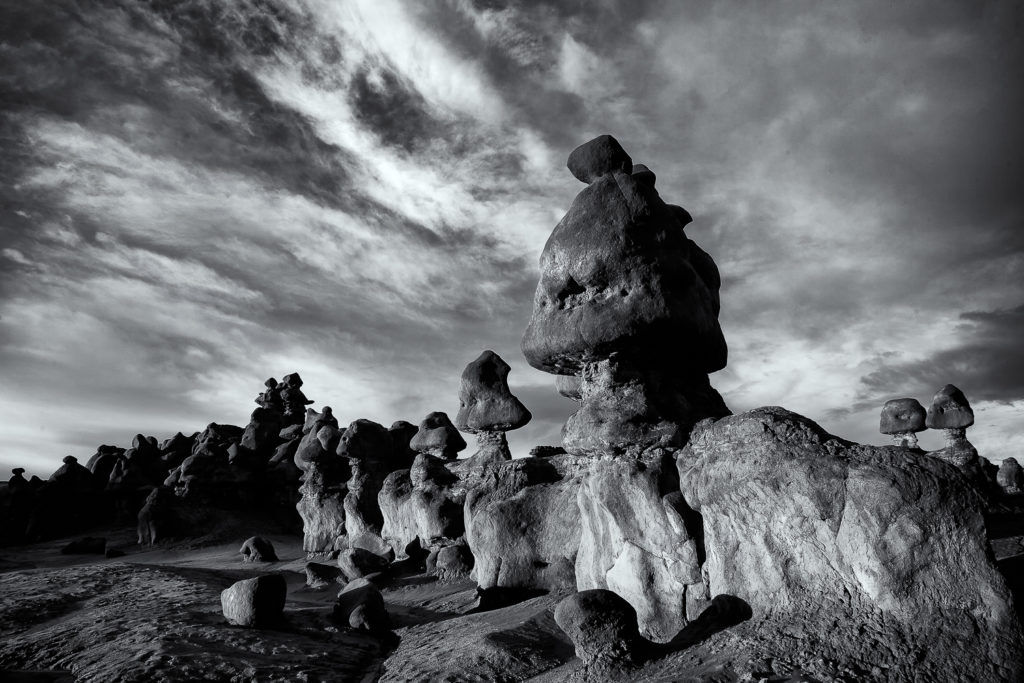 Victoria Porter –  I chose this image from our first morning of the workshop because John had mentioned that Dan Sniffin had pointed out to him that one could shoot a color image with light and shadow such that it would easily turn into black and white. This location had the perfect circumstances in that the bare trees received early morning light before the red rock behind them and the simplicity of the resulting image appealed to me. 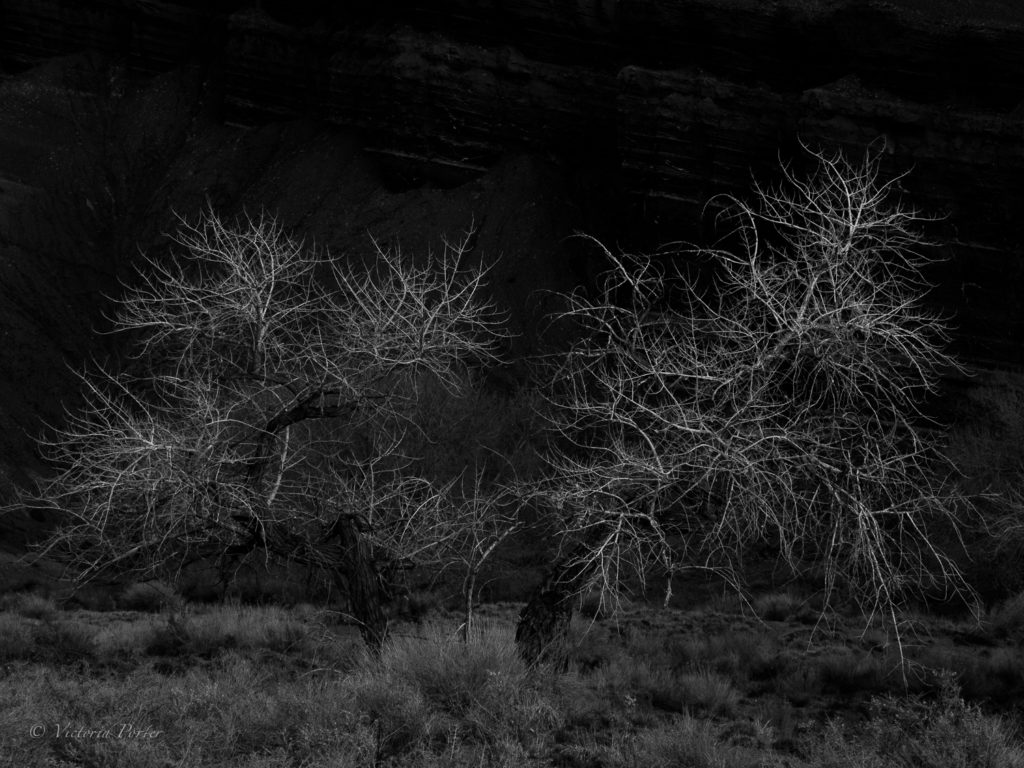